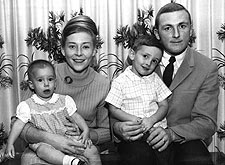 (above) Bill Masterton with family 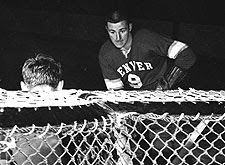 The death of DU hockey Alum Bill Masterton 40 years ago this week was tragic, unnecessary and foolish. And it changed hockey forever.

Such is the legacy of the only man who died because of injuries caused in an NHL game.

Masterton died in a Minneapolis hospital shortly after midnight on Jan. 15, 1968, a little more than one day after the 29-year-old rookie center for the Minnesota North Stars – now the Dallas Stars – fell to the ice during the first period of a game against the Oakland Seals and suffered significant damage to his brain stem. Masterton, like virtually every other player in the NHL at the time, wasn't wearing a helmet.

He'd worn a helmet at every other level of the sport – growing up in Manitoba; at the University of Denver, where he starred in the early 1960s; playing for the U.S. national team after he gained dual citizenship; and in the minors before he retired from hockey in 1967 to settle near the Twin Cities. (read rest of story)
Posted by dggoddard at 12:11 AM

Arguably the greatest player ever to lace 'em up for DU. If you talk to anyone who got to see him play they will tell you that. All DU players should know about him as he was part of the early foundation of the program.

My Dad and the guy I share Gopher hockey tickets with were at that game. Over the years they have described the sound of Bill's head hitting the ice as a truly horriffic sound. One that they would never forget.