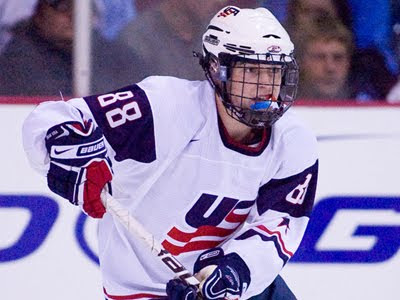 (above) Matt Van Voorhis from Edina, Minnesota will attend DU
The USHL Website is reporting that defenseman Matt Van Voorhis of Team USA has verbally committed to attend the University of Denver. No year is mentioned, but we'd expect it to be in 2011 or 2012.

The 17-year-old blueliner from Edina, Minnesota has two points (1g, 1a) in 20 USHL games this season while playing for Team USA's Under-17 squad. He has been described by the US Hockey Report as an "excellent skater and puck handler with great mobility."

He is teammates with DU recruit Zac Larraza, a forward on the USNDT-Under 17.

Posted by dggoddard at 3:48 PM

What type of pick up do you think this kid is? Were there any other schools in the running?

Its pretty rare to see a 5'7 155 lbs defenseman, so that really jumps out at you. Not sure yet who else was after him. Maybe we'll hear more next week.

Van Vooris had the skills to be selected for the USNDP so he obviously has some unreal ability.

DU had good results with Patrick Mullen as an undersized defenseman so playing for Gwoz and staff will surely help his development.

Gwoz really emphasizes the importance of bringing the puck up the ice, so Van Vooris will a handy transition game weapon.

I know he lived in grand forks for a time when he was real young, and was actually a sioux fan, but i'm not sure how much they were after him considering they just got the dillon simpson committment and they're pretty set on defense for a few years now. that's the only school i've heard with interest... but i'm sure there were more considering the face time he gets playing with the USNTP. Good pick up.

he was also being recruited by BC, Vermont and ND.