Is DU Hockey Better When CC is Very Good? 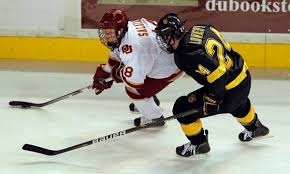 Root for CC? Well, not exactly. But, after placing last in the National Collegiate Hockey Conference (NCHC) media poll for the second straight year, is DU hockey actually better off with a strong Colorado College team? Of course, any hockey team can win on any given night because hockey is about emotion and effort as much as it is skill. Especially in a relatively short 4-game series when the under dog is highly motivated. But, over the course of a long season, the most skilled teams will usually rise to the top of league standings.

Do you think DU hockey is better when their main rival, CC, can battle for the top spot? Or, do you see an extremely competitive NCHC and believe DU needs to scratch out every win it can get - especially against CC!
Posted by 5BWest at 11:33 PM


Great question, but difficult to answer since we all know CC Sucks even if they somehow win something of minor importance. It's tough playing a top 15 team every night. The NCHC is just that strong. Having 4 supposedly easy win games is a blessing and a curse. Cannot take a night-off against anyone. A loss to CC kills our pair wise ranking and a win does nothing to enhance our status pair wise. That's the curse.
Blessing- Need a softie once in a while, but as stated above, a loss is a killer.

Conclusion- WE are better off with CC good. A win will help us get into the tourney where a loss won't be devastating to our tournament chances. If we win the Gold Pan every year and CC has a strong club, I'm good with that.

Charles is right. Rivalries are so much better when both programs are nationally relevant as well as locally relevant.

A a good CC program pushes DU to be better in every aspect. It creates more excitement for the games, and makes the stakes higher whenever the teams play, keeps the PWR up, helps recruiting for both schools and helps the league in terms of TV and negotiating power.