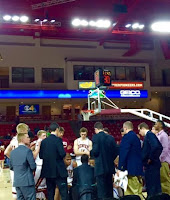 The good news, Denver held all but three Eastern Washington University players to a total of 2 points. The bad news, the other three players scored 72 of the Eagles 74 points.


The Big Sky defending champions, Eastern Washington Eagles, invaded DU's Magness Arena for a mid-day tilt Sunday afternoon. With 8 of their first 11 games played on the road or neutral courts, the Eagles came into the game following three straight losses and a cancellation in their last four games. Heading into Sunday, the Eagles average over 10 3-point buckets per game, led by Austin McBroom at 18.7 ppg. followed by forwards Felix Von Hofe at 14.7 ppg. and Venky Jois at 13.8 ppg.

The game started with a technical foul shot and a 1-0 Denver lead. The two teams traded points to a 9-9 tie. A three point bucket by Engesser made it 14-9 DU at the 12 minute mark. The teams knotted the score at 16 points at the 11:30 mark. Then. the fireworks started with 3-point bombs from EW as they took a 23-30 lead at 6:38. The Eagles burned up the nets with 55% shooting from 3-point range and 58% from the field. DU shot 20% from the arc and 46.4% from the field. More big 3's by the Eagles, on 8-16 shooting from the 3, put the Eagles up at half, 43-32. Von Hofe torched the Pioneers for 22 points in the first half - by far the most damage by an opposing player in a single half of basketball this year versus the Pioneers.

DU could never put together a big push in the second half to get back into the game. DU finished the game shooting 40.4% from the field and 23.5% from the three-point range - their worst shooting of the season. The rebounding disadvantage, 21-40, all but eliminated any comeback hopes by the crimson and gold. Denver had nine players with double-digit minutes but no one could solve the big three from Cheney Washington and their 12 three-pointers.


72 of the 74 points from 3 players. pathetic defense,; falls on coach Scott. Highlight of game was TT and TT on the video screen

It wasn't that bad. The Lakers (4-23) were practicing in Hamilton Gym during the game. So, DU was not the worst team in the building yesterday. Rosga's first move is better than Kobe's at this point.