Hey Guess What, Denver and North Dakota Don't Like Each Other 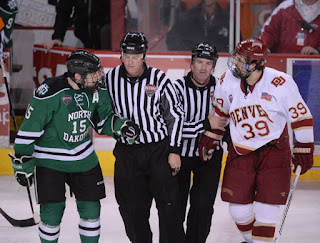 This is the biggest and best rivalry in college hockey and the 2015-16 edition begins tonight at "The Ralph." Apologies to BC-BU: Denver-North Dakota is the best college hockey has to offer. No teams have played each other with more on the line in the last decade.

The rivalry has been well-documented. Robbie Bina. Mike Prpich and Geoff Paukovich. Jesse Martin. Gwoz's ejection. The 1958, 1963, 1968, and 2005 National Championship games (3-1 in favor of DU). The 2004 West Regional stunner in which DU won 1-0 in Colorado Springs to advance to the Frozen Four. The double overtime WCHA Final Five title game in 2012.

It's all there. In the last 13 years, these two teams have met in the postseason (8 times) more than they haven't (5). If familiarity breeds contempt, North Dakota and Denver loathe each other.

There are plenty of weekend previews out there, many from North Dakota outlets. There isn't much more to say about this weekend's series that hasn't already been said. These are two very evenly matched teams meeting in Grand Forks this weekend.

Denver has very few weaknesses that the Fighting Hawks (that's weird) can exploit. They have some of the best forwards in the game in Danton Heinen and Trevor Moore. DU has a proven goaltending tandem in Evan Cowley and Tanner Jaillet. And the Pios have one of the best PK units in the country (89.7% kill rate ranks them 8th nationally).

If there is something that North Dakota can take advantage of, it's DU's lack of size on the blue line. Denver has a very undersized group of defensemen and we saw that size mismatch hurt the Pios in Boston.

North Dakota is ranked #4 nationally by USCHO for good reason. NoDak's top line of Drake Caggiula, Nick Schmaltz, and Brock Boeser has carried the Fighting Hawks offensively throughout the season. In fact, that trio has accounted for nearly 40% of all of UND's goals this year (21 of 55). Defensively, North Dakota's goaltending situation is very solid as well. Their own goalie tandem of Matt Hrynkiw and Cam Johnson has been a steadying force at the back.

There are always a lot of emotions on the ice when the Pios clash with the Fighting Hawks (still doesn't make sense). These teams always get under each other's skin. North Dakota has been the antagonist more often than not in recent memory (maybe I'm biased) and when the Pios get into penalty trouble, the Hawks (huh?) have been able to do a good job taking advantage.

When the Pios keep their composure and let NoDak get themselves into penalty trouble (it happens more often than many UND fans would probably like to admit), Denver often capitalizes and dominates play.

However, even if the Pios can keep their level heads and let the Fighting Hawks get into penalty trouble, victory this weekend isn't guaranteed. This series is at The Ralph and UND fans are loud. The Pioneers will need to take the crowd out of the game early and keep their foot on the gas throughout the weekend if they are going to come away with a couple of victories.

There hasn't been a sweep by either team since 2008 when North Dakota swept the Pios in Grand Forks. That streak will stay alive for at least another weekend. Denver and North Dakota will split yet another series this weekend. Sweeping the Fighting Hawks (never going to get used to this) at The Ralph is next to impossible. Combine rabid NoDak fans with a very good on-ice product, you get a tough environment for a visiting team.

Most important factor is Will Butcher is disqualified from game 1 vs UND after that CFB penalty in Wisconsin two weeks ago.

Can't see DU winning without him in Grand Forks, so Game 1 goes to UND, game 2 goes to the Pios.


Zajak will step up in Butcher's absence. Expect a goal and assist from him tonight. Yes, I still expect a split.

Another loss tonight and DU will be out of the Top 10, with St. Cloud State on the horizon.

Well shit... that was easy. Maybe next time NoDak should skate with a man down the whole game to even things out. That might not work either for denver... the game winner tonight was a shorty.

Monty said after the game Friday night they laid an egg, I think the weekend was an omelet. When was the last time DU only scored one goal in a series? Moore and Heinen seem to be really struggling. The team is getting pushed around, size does matter!

Abysmal weekend for DU. Outscored 9-1, outshot 59-41, 0-10 on the PP.... Ugly. Sounds as though the Pios were 3 steps behind the entire weekend and the compete level wasn't where it should have been. Coming off a bye week, with school being out, and on the road against perhaps their biggest rival, I expected better. Definitely a head-scratcher. Doesn't get any easier next weekend with SCSU in town.

Not sure what to make of this team after 14 games. Some tough OT losses, a handful of convincing wins, and the big setback against UND. Hoping DU can come out against SCSU next weekend and build some momentum before the break.

Early Christmas present, bet USD -2 over DU tonight. I gave you Wyoming plus the points over DU. That was lock of the year. This is close.