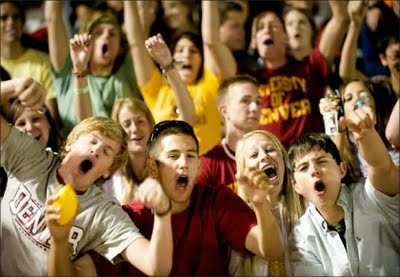 Report on School Spirit at DU

Ten recommendations for creating the optimum collegiate spectator experience for DU athletic events
June, 2004
by Tom Douglis '86 & Damien Goddard '88
"Its not exactly breaking news that college sports has several natural advantages over the pros, including pageantry and the infusion of spirit by students and alumni."
-Jon Saraceno, USA Today Columnist


Upgrade the DU Student Section Experience
.
The first question is what organizational form should the Student & Alumni cheering sections take? There may still be some remaining brand equity and recognition in the Bleacher Creature name and organization, but of course, there are no bleachers in the Magness. Perhaps it is possible to remove a few rows of seats and replace them with bleachers? The original seats could be placed in storage and reattached at a future date. Marketing the “bleacher seats” to your most rabid fans would symbolize the importance of fan participation. There would be “status” attached to the seats and the alums (at least from the ‘80s) would snap them up. The fans in the bleacher seats would lead the cheers and it would be a great reminder of the old DU Arena. It is not inconceivable that the bleacher seats could become popular and that more could be added in the future.
.
We should work to get T-Shirts donated to the student section from one (or more) of our corporate sponsors. Prize giveaways would primarily go to those students who wear the shirts, school colors or spirited costumes to the games. Bright colored shirts are better for television recognition (Michigan Basketball student wear yellow). As a point of reference, Budweiser donated the shirts to the Bleacher Creatures in 1986.
.
We should consider always holding a major pep rally before the Homecoming game. This could include a “meet the team” element, prize giveaways (game-worn jerseys, etc.), teaching cheers and instructing students on desired fan attire. Additionally, Damien would enjoy the opportunity to share his cheer section skills by helping to “train” interested potential student cheer section leaders for that game and for the season as a whole.
.
We can look back on own experiences in shaping the DU student cheering in the 1980s, when Damien’s “Bleacher Creatures” initiative made Denver’s old arena balcony one of the top student sections in the WCHA. Restoring that kind of organization today must be student-driven to be effective, but with some guidance and effort, it can be helped along by DU alumni and the administration.
.
Theme nights are a great way to build unity and excitement. Toga nights, 70’s nights, Halloween, or movie theme nights (music from the theme or movie clips are played during timeouts -- Austin Powers, Old School, Caddyshack, etc.) are fun for the students and fans and, interspersed with old DU sports moments could be effective in generating a more animated student section.
.
Building Local Alumni support
We think it would be a good idea to sell authentic DU hockey jerseys via special order with the year of graduation and “Alumnus” as the name on the back. (e.g.‘88 or ‘72). This might be difficult, but making an effort to seat the 60s, 70s, 80s, and 90s alumni in block sections would build camaraderie and probably would be helpful in generating school spirit.
.
Road Trips
DU fans had a great time in Boston in 2004. This NCAA experience suggests that the University should consider sponsoring annual trips to other games, such as bus trips to Colorado College games. Such trips may lose money if every seat isn’t sold, but the longterm benefits of implementing these road trips should outweigh the small costs. In addition, Boston area alums should be encouraged to organize and rally for 2004 games at Boston College and Northeastern, Chicago/Milwaukee area alumni should rally in Madison, Wis., and Minnesota-based alumni should do the same in Minneapolis/St. Paul.
.
What else can be done to make the games more fun for the students?
Enhance Fan Communications
Email, Blogs, Websites, E-vites, Message Boards & Electronic Newsletters. Nothing is more effective and inexpensive than starting an email newsletter to get your message and excitement out to fans. This newsletter could be handled by DU alumni volunteers, at no cost to the university, and could be coordinated with a new DU hockey fan web site, where information, cheers, and giveaways could be coordinated. These newsletters do not have to be directly affiliated with the university and usually are more effective if they promote free speech and progressive ideas. Collecting emails addresses of students can be done in front of the classroom buildings, at the season ticket campout, cafeterias & residence halls and can be tied into promotional giveaways. Fan & alumni emails can be collected before the games perhaps between periods.

Establish Preliminary Funding Avenues
In 1986 most of the Bleacher Creature money came from corporate sources and local businesses:• 250 shirts were donated by Budweiser• Advertising was sold on the cards placed on the bleacher seats• Advertising was sold in the DU Hockey News• Students kicked in some money• The Student Senate sponsored the bus trip to CC.• At the 1986 Final Four, DU gave Damien a budget ($500) to create fanexcitement. In 1987, the money came from the Student Senate (student activity fee)• Utilized DU purchase orders to order novelties via mail order

1. Willpower - Does the University of Denver want to proceed with this project?

Encouraging DU fans to cheer at the games is the easy part. The greater challenge is setting up an infrastructure to allow the excitement to build into something great for the university.

A number of DU entities could be involved in the creation of this program, for example:• Athletics/Sports Marketing• Hockey Coaches/Staff• Friends of Pioneer Athletics• Administration• Alumni and Parent Relations• Office of Communication and Marketing• Admissions/Enrollment Management• Lamont School of Music/Pep Band• Cheerleaders/Mascot• Office of Student Life• Student Senate• DU Programs Board• Student Media• Corporate sponsors/local businesses• Interested individuals• Student leaders
.
Conclusion:
.
We hope this report is some assistance to the University in its quest to improve student/alumni involvement at athletic events. We believe an upgrade in school spirit, a return to school traditions and an improved collegiate athletic spectator experience will be invaluable in forming stronger emotional bonds between students, alumni and the University.

.
This report is, of course, intended as a preliminary guide only, and we understand that the suggestions herein will be modified, enhanced or deleted depending on the wishes of the administration. At the same time, we hope this report has communicated at least a fraction of ou own passion for enhancing the DU spectator experience for the benefit of everyone connected with our community. We look forward to your support!
GO PIONEERS!
Feel Free to add comments , ideas and suggestions below.
Posted by dggoddard at 4:34 PM

DG, What was the DU response to your suggestions? I'm an Alumni (1986), and have been a season ticket holder for 20 years. I too am frustrated with the mini-pepsi center atmosphere. Just wondering what their response was.

Thanks for responding, its great to get your feedback. It has been a slow process getting these ideas in front of the right people. I think many agree that the thoughts listed herein would be great for the school, but who is going to be in charge of implementing it; The Athletic Department? The Students? The Trustees? Administrators? The Alumni Office? The Faculty? I'm beginning to think that it can only be implemented by a Vice-Chancellor or above who "gets it" and decides to run with it.

Last year I showed the paper to the Max Goldberg (AUSA President) and the DU Student Senate & they thought it was great. The Senate organized a Pep Rally before the Wisconsin Series, a CC Road trip last season & mentioned it in their Minutes. I think the students like the concept and there is potential dealing with the Student Senate in the future.

I published about 10 copies of the first draft and showed it to several people in the Athletic Department. This was before the new athletic director, so I'll take another run at it in a few weeks.

We emailed it to the previous Chancellor after the concept was put to him by a third party. We never really got a response. However a new Chancellor is in place so we are back to square one there.

Start with t-shirts or something.

Great read. So did they ever take any of these ideas and consistently implement them?

Five years later, I would say about 80% of the plan was implemented. Early on we had a series of meetings, which helped open dialog.

Full credit goes to the Athletic Department, which has really been receptive to new ideas and listening to the students on this project.

This was an alumni driven project and it didn't take off until we made contact with the students. Facebook proved to be an amazingly effective tool.

One of the surprise early successes was dusting off the school fight song which had not been heard at DU for over 20 years.

This Blog, the Boone mascot, increased school spirit, getting the Pep Band back at hockey games, The "D-Rah" Fight Song, the CC White-Out are just a few legacies of this report.