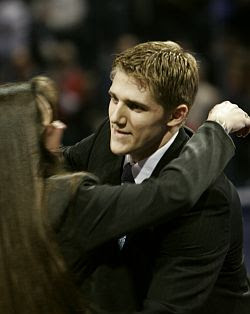 Matt gets a well deserved hug from Mom

"Defensemen are kind of unsung players on the ice," Carle said. "Being there to make a good breakout pass or breaking up a three-on-two, those aren't stats that people write down. For a defenseman to be up here, obviously you have to put up a decent amount of points to maybe get some recognition and I'm sure there's a lot of defensemen out there in the country that could be up there just for their defensive abilities."

"It's almost like a storybook with what's happened in my college career," Carle said. "I just really have to give credit to the University of Denver for giving me the opportunities. Not just letting me play there, but for the group of guys that were brought there to play with me. Winning two national championships and then this year with the help of the guys getting me get up here to win the Hobey Baker, I can't give enough credit to my teammates over the past three years."
.
A first-team All-WCHA selection for the second year in a row, Carle leds the nation in assists (42) and leds all NCAA defensemen in points (53). In conference games he led the WCHA in assists and finished second in points. Carle, who recently joined the NHL's San Jose Sharks, was a member of the 2004 and 2005 NCAA championship teams at Denver and was a co-captain of the Pioneers this year. A real estate and construction management major, he carried a 3.30 grade-point average and was a WCHA All-Academic Team honoree. He participates annually in the "Skate with the Pioneers" event for terminally ill children, and has volunteered at the Alaska Food Drive and a holiday children's charity drive.
Posted by dggoddard at 5:38 PM

Email ThisBlogThis!Share to TwitterShare to FacebookShare to Pinterest
Labels: Carle

Next Alaskan to win the Hobey?

Congrats to Matt on being the first Hobey winner at DU. This is a very special award which not only reflects on him as a player but on his character and his excellent school record. This award also reflects on the team behind him,the coaching staff, support staff and his family. Way to go Matt. Alsocongrats on being named 1st Team All American.

Grow back the long hair.

I've posted this all over the net, but why not one more time...Congrats to Matt Carle, his family and the entire Denver program. This was a very proud day for everyone who has ever been a Pioneer fan, as we celebrate the newest additon to the Pioneer Trophy Case. Well deserved.

Nice writeup by the Sharks here, with pictures of Matt with his mom and girlfriend when you scroll to the bottom....