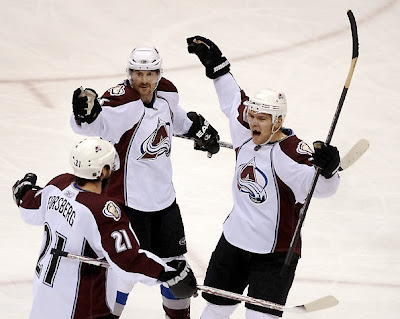 ST. PAUL, Minn. — DU Alum Paul Statsny's first career playoff goal came at important juncture of the Avalanche's playoff series with the Minnesota Wild. Despite being dominated for most of the first two periods, the Avalanche beat the Wild 3-2, taking a lead of the same margin in the Western Conference quarterfinals.

Avs coach Joel Quenneville probably deserves a verbal bouquet or two for making some lineup adjustments after the second intermission. He moved Peter Forsberg back onto a line with Milan Hejduk and Stastny, and moved Wolski back onto a unit with Joe Sakic and Andrew Brunette. The Avs started to play more cohesive hockey in all three zones again and finally put some pressure in the Wild's end.

"We had to do something, because things weren't going our way," Quenneville said.

Wild defenseman Sean Hill took an interference penalty at 3:10, tackling Ryan Smyth in the corner. It was Colorado's first power play in 17 minutes, and the Avs took advantage at 5:06. Wolski, alone in the right circle, one-timed a slap shot past Backstrom to the short side, after a saucer crossing pass from John-Michael Liles. In hockey parlance, Liles' pass is known as a "pizza," and Wolski dug into it.

"I was just happy to get some time on the power play, and I just want to try and make the best of my opportunities," Wolski said.

Liles said: "Woolly's a talented player and definitely has the ability to make shots like that. He made a great shot. But that was definitely Theo's night. He played unbelievable. Right now, we're just going to go back and shore some things up and come out ready to go on Saturday."

Stastny's beautiful backhand goal, at 6:25, turned out to be the game-winner, as Brian Rolston scored on the last of his eight shots with three seconds left. It was Stastny's first point of the series, but perhaps the prettiest goal of any so far. In one motion, Stastny corralled Hejduk's hard lead pass and lifted the backhander home.

"It's good for the confidence, but as long as we got the win, that's all that matters," Stastny said. "They played real tough against us tonight, and we're going to have to be better the next game if we want to win."
Posted by dggoddard at 9:14 AM

Great to see Stastny get in the scoring column. The Avs were lucky to win that one. Jose was the man last night.