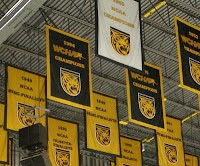 Our friends down the road in Colorado Springs still have one Top 10 Ranking that they can't choke away. Once again the Princeton Review has recognized Colorado College as the #7 pot smoking school in the country.

Describing the students as "tree hugging, pot smoking, vegetarians," Princeton Review comes down hard on the liberal arts institution. With a high price tag and esoteric approach to academics, the college has become a mecca for entitled rich kids with artistic pretentions.

Unfortunately, like its underachieving hockey program, even the pot smoking students at CC can't finish a season with a #1 ranking.

Meanwhile over in Boulder, the University of Colorado ranked third in the nation for marijuana use, 13th as a party school and 14th for drinking hard liquor. The annual ranking puts Boulder at 16th for being "a great college town."

How widely used is Marijuana
Posted by dggoddard at 1:20 AM

No rich kids go to DU.

They do. But our "rich kids" get business degrees to build the family's wealth, not squander it away with poetry degrees.

I went to watch CC play DU in the Springs last year. The majority of students I saw at the game had the "deer in the headlights" look! I forgot to congratulation them on the 50 year anniversay of the last National Championship.

It must be tough to watch hockey through blood-shot eyes.

I promise you none of them were watching the game. They probably couldn't even tell you what day it is. My fondest memory of CC was the time I went with a bunch of friends to a game at the Broadmoor. We sat in the CC student section and of course a fight broke out. Let's just say, the tree huggers were much of a match!!!! Ah those were the days

I'd rather sit next to 100 stoned student fans than 2 drunken assholes.

Just remember that marijuana is a "gateway drug" to Red Bull & Vodkas, so the next time you see the students there'll be 100 assholes.

If you think going to a CC game means only sitting next to stoners, you've got more than a few screws loose. There are way more drunken idiots at those games than at DU games.

Categories in which DU ranked in Princeton Review's top 20:

They should have categories for 'arrogance' and 'CC obsession'.

I agree with you. Im a DU fan and who cares if CC smokes pot, believe me, DU should be up there. Everyone at DU these days is a weedhead. More than half the student section is blazed.

DU Top 20: Daniels College of Business- #6 Nationally, #1 Regionally for MBA; #3 in the world for Ethical Standards by the WSJ

Hey speak for yourself! I do a lot of coke and PCP, thus more adrenaline to run over CC with! Don't hate on the nonweeders.

It doesn't bother me that DU isn't ranked on anything in the Princeton Review. The less connection with anything named "Princeton" the better.

There are schools that actually give degrees in poetry? Damn, and I'm pissing away my future on engineering :D