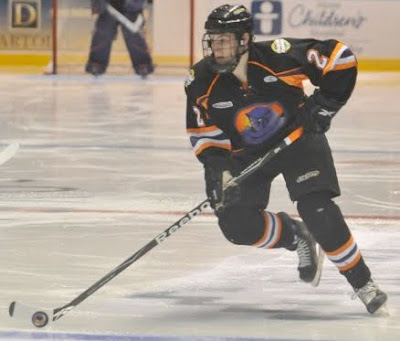 (above) 2011 DU recruit Scott Mayfield is one of two DU recruits who could be selected in the first round of the 2011 NHL Draft
From: USHL.com

Two DU recruits are among the 35 players invited to participate in the 2010 NHL Research, Development and Orientation Camp in Etobicoke, Ontario on August 18-19. Incoming DU Freshman Nick Shore and high school Senior Scott Mayfield will participate in the Camp. Mayfield will play in the USHL again this season for the Youngstown Phantoms. Both Mayfield and Shore are expected to be first round draft choices next summer.

The purpose of the camp is for NHL team officials to get a look at possible rules changes with the extra benefit of seeing top 2011 Draft-eligible prospects show off their skills while competing under the rule changes.

"This Camp has the bonus element of giving general managers and their staffs an early season look at many of the players whose names they will be calling out as their teams' top-round selections in the June 2011 Entry Draft in St. Paul," said E.J. McGuire, Director of the NHL Central Scouting. "These are some of the most talented players available to execute the unique skills and strategies which the camp is designed to test and evaluate."

In all, 20 forwards, 12 defensemen and three goaltenders were picked for the camp. They will be led on the ice by veteran coaches Ken Hitchcock and Dave King.
Posted by dggoddard at 2:23 PM

What a great experience for both of these kids to be exposed to some high level NHL coaching and thinking. Dave King and Ken Hitchcock are both great teachers of concepts.

Between the incoming freshmen and the next two incoming classes, how do you think we stack up on paper compaired to the rest of college hockey? What kids do you think will be drafted in 2011 and 2012? What other D-1 scools are looking solid over the next 3 years? Who is on DU's radar that has not yet commited?

Last year DU had the #2 recruiting class in the country according to "Inside College Hockey." I think DU's 2010 class is better than the 2009 class and is our best class ever.

The major flaw with the recruiting rankings is that many of the top Freshman from last season have already gone pro. Until someone comes up with a formula that weighs the likelihood of top recruits going pro, the rankings are going to be pretty useless.

DU supposedly has a 2012 offer out to Quentin Shore. We also believe that potential 2012 1st Round pick Seth Jones may be on DU's radar. DU is also looking at a kid out of Minnesota.

As for the other schools; DU usually competes for recruits against Wisconsin, CC, Michigan, BC, BU and North Dakota. I doubt that will change as long as Gwozdecky is the head coach.

Much can happen between now and the 2011 draft, but with N. Shore and Mayfield there is the possibility of 2 first round draft picks.

Sorry, I can't add more details on the Minnesota kid just yet. Lets just say he's an interesting recruit and leave it at that for now.

Does he have a cousin who plays college hockey? Just wondering if im thinking of the same guy.

Is Nick a better prospect than Drew?

Hard to say about the Shore brothers.

Drew was considered to be a sure fire 1st Round NHL Draft pick who ended up falling on Draft Day 2009 to early in the second round.

Nick has been prominently mentioned as a possible 1st round pick in 2011, but if the draft were held today, he would most likely go in the 2nd round.

Going in the 2nd round is not necessarily a bad thing. NHL teams are usually more patient and will allow 2nd rounders to stay in college an extra year. Paul Stastny was a 2nd round pick for the Avs.

With the way the CBA is structured, draft status means little from a contract standpoint. The NHL always pays the rookie max to first rounders, and now that the Maple Leafs just paid Jerry D'Amigo (a sixth rounder) near the rookie max, it's clear that lower-drafted prospects can get the top shelf deals, too.. Bozak got a great deal as an undrafted FA, so the most important thing is to play well

I think there is more pressure on first rounders to succeed, but on the flip side of that, first rounders will get every opportunity to develop, as there is some pressue on NHL teams to pick the right kids in the first round.