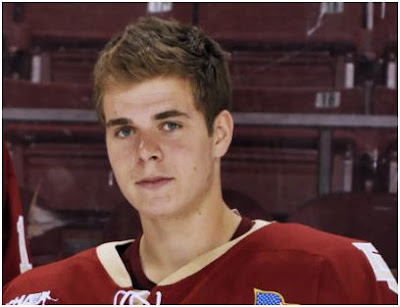 (above) DU Freshman forward Nick Shore is eligible for the NHL Draft this summer
University of Denver centerman Nick Shore, who contributed two goals and three points against arch-rival Colorado College, has been named the Red Baron WCHA Rookie of the Week.

A 6-0, 185-pound freshman from Denver, Shore tallied two goals and had a team-leading seven shots on goal as the No. 1 star of the game in DU's 5-3 win against the visiting Tigers at Magness Arena on Saturday night. He scored Denver's first two goals, including one on the power-play, near the end of the first period after the Pioneers had fallen behind 2-0. That victory enabled DU to keep possession of the Gold Pan trophy, awarded annually to the winner of the DU-CC series. On Friday, Shore added an assist in a 3-2 loss at Colorado College.

In addition to his three points and seven shots on goal, Shore added four hits and two blocked shots and he now has eight points (3g, 5a) during his career-best, five-game point streak.
Posted by dggoddard at 5:23 AM