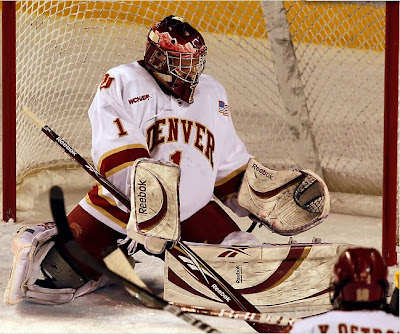 Midseason MVP - Drew Shore: Tied for the team team in goals, plus/minus & tied for second on the team in assists. Most impressive stat; scoring on 26% of his shots on goal.
MVP Contenders - Sam Brittain, Jason Zucker & Matt Donovan.
----------
Midseason Defensive Player - Matt Donovan: Tied for second on the team in assists and second on the team in plus minus. Established himself as one of the elite WCHA defensemen.
Defensive Contenders - David Makowski & John Lee
---------
Midseason Freshman - Jason Zucker: Tied for the team lead in goals. Easily one of the two best Freshman in college hockey.
Freshman Contenders - Sam Brittain, David Makowski
----------
Most Under-rated Player - John Ryder: Four assists and plus 8 in the first half of the season. NHL scouts are taking notice of Ryder's big hitting game, while he quietly is fourth on the team in plus/minus.
Under-rated Contenders - Dustin Jackson, Chris Nutini, Luke Salazar & Paul Phillips
----------
Most Inspirational Player - Jesse Martin: DU has gone 10-2-1 since Jesse's serious neck fracture.
Inspirational Contenders - Kyle Ostrow.
----------
Most Improved Player - Drew Shore: Made the adjustment from role player to elite forward look easy.
Improvement Contenders - Luke Salazar, Dustin Jackson, Chris Knowlton

Posted by dggoddard at 8:22 AM

Feel free to disagree with any of these picks.

Ok,does Bennett fall into any particular category? How about the lack of production from the younger Ostrow and Shore?

How about most disappointing loss, CC 9-2

DU has plenty of room for improvement in several areas.

The team was racked with injuries in the first half including Nick Shore, William Wrenn, Jesse Martin, Dusty Jackson, John Lee, Adam Murray & Beau Bennett. To be where they are now, despite the injuries, is nothing short of amazing.

Gwozdecky has done a masterful job of juggling the lines through the injuries and getting timely production from Drew Shore's line.

Anthony Maiani has traditionally been a "second half player" so there's reason to expect his production to go up.

The power play could use more consistency but appeared to be on the upswing.

Getting more production from the other lines should come with lineup stability.

The defensemen have been awesome and Brittain's goaltending has been solid.

How about getting Gwoz a new contract, tht would make a great Christmas present.

I like where this team is right now. I think they are poised for a terrific second half of the season.

DU ranked 7th in both polls today heading into the Christmas break...not bad for a team that started the season with a lot of questions marks!

Good list--hard to argue with any of those awards. Shore has been awesome, and Zucker continues an amazing freshman season. As good as Brittain has been, Zucker has been even better. I continue to really like Ryder's game--he is mean, tough, and physical, and doesn't take any crap out there. Donovan is immensely talented, but I think he can be even better. He's been lazy at times and sloppy with the puck, but when's he focused and determined he can be a man among boys out there.

I think Dusty Jackson is a real wild card--he's only played in 8 games but it's easy to see what he brings to the table. I think he could be a huge factor for this team in the 2nd half.

Looking at the 1st half stats, I think there are a handful of guys poised to contribute more, at least on the scoresheet. Knowlton has 1 goal in 20 games, Shawn Ostrow has 0, Bennett has 3 in 17 games, and captain Ostrow has 4 in 20. You have to think Maiani will catch fire too. If those guys can chip in more DU will be even more formidable.