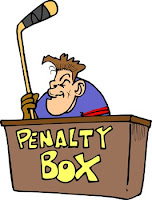 From: Boston Globe
by Mary Carmichael

When Boston University released its report Wednesday on hockey players’ “culture of sexual entitlement,” it kept most of the investigation details — including accounts of sexual debauchery and wide-ranging allegations of academic trouble — confined to confidential subcommittee reports.

Here are the highlights:

At a 2009 NCAA championship party at Agganis Arena dozens of guests drank from kegs in the locker room showers and took to the ice naked to shoot pucks.  At the same party people were having sex in the penalty box.

One player told the task force, “You don’t ask [permission for sex] when you are drunk,” adding that he did not see how the actions of the two players charged last year constituted sexual assault.

A BU student told of Facebook postings, “in which hockey players boast about their sexual exploits,” referring to conquests as “kills.”

The subcommittee findings also noted that some BU hockey players have SAT scores “far below the vast majority of their classmates.”

Faculty members gave the task force mixed assessments of hockey players as students. One professor described them as “respectful, prepared, and active.” But another told of six players who intimidated classmates, answered their cellphones mid-lecture, and “tried to ‘hijack’ his course,” the report says. The professor told the leader of the group to shape up; instead, all six players dropped the class.

Parker & his coaching staff were essentially given carte blanche for overseeing the team’s behavior. One team member said Parker “cares too much about hurting the important players’ feelings. . . . He’ll criticize, then apologize.”

Posted by dggoddard at 2:18 PM

BU Hockey Task Force Report
"Academic performance data show that with some exceptions, the academic performance of the men’s ice hockey team falls below that of the undergraduate student body as a whole... The admissions data we examined indicates that a number of team members matriculated despite test scores and grade point averages that are considerably lower than the mean for students admitted to Boston University."

Can't say that DU's student athletes don't get some special treatment, but academically they have outperformed the student body as a whole.

Could be more things I didn't see, but I took some classes with hockey players (and other student athletes) and the only 'special treatment' that I noticed was being able to have a little more flexibility. Like being able to take tests around their hockey schedule. Although, teachers would let me do that too if I had a valid reason.

Sex in the penalty box...That's why I always worried about the Sioux when two of their boys went to the box at the same time.