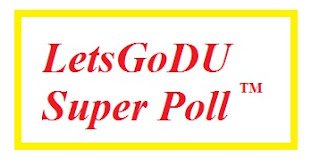 1. Denver - Denver is always undefeated in the same year as a super blood moon lunar eclipse (Check it out)
2. Boston College - Hockey invented here - just ask them.
3. Boston University - The White Sox of Boston. 2nd in their own city - always and forever.
4. Minnesota-Duluth - Most confused freshmen in hockey, "Where's Don Lucia?"
5. Providence - Loved the movie
6. North Dakota - Take away the oil and two trees and you have Lot E at the Pepsi Center
T7. Harvard - No 'Athletic' Scholarships? Sure...and I got into Harvard.
T7. Miami - Take away the sunscreen, sand, pretty girls, and palm trees and you're there
8. Nebraska-Omaha - Without Warren Buffet, this place is Camden
9.Minnesota - Don Lucia turns hockey prep All-Stars into the Washington Generals
10.Yale - No 'Athletic Scholarships? Sure...and it felt so good to tell their admissions department, "Thanks but I'm going to DU!"
57) Colorado College - Last National Championship was the same year when All Shook Up (Elvis) was #1. Ironic isn't it?
*The LetsGoDU Super PollTM is a scientific analysis factoring strength of schedule, player statistics and coaching tendencies. Then, Denver is placed in the one hole, CC is placed last and the rest of the teams more or less settle where they might likely finish.

Great poll and spot on. The only inaccuracy, in my opinion, is there actually are a lot of hot girls at Miami (OH).

There are two trees in North Dakota, who knew!


Wow, we both were accepted at Harvard and Yale and turned down the Ivies for DU. A few years ago, I went to see DU hoops at Yale and heard the following for 2 hours from the Yale Pep band: