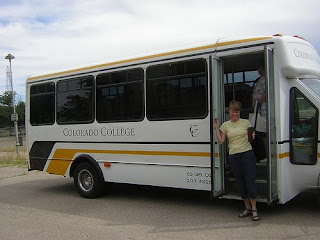 In a Colorado College hockey season full of long and weather-delayed road trips, Sunday’s 21-hour bus ride from Bemidji, Minnesota, to Colorado Springs surpassed them all.

Shortly after boarding the bus in Bemidji at 6 a.m. Sunday (local time) to drive to the Minneapolis airport four hours south, the team’s 11:20 a.m. flight was canceled because of a blizzard that hammered the Twin Cities with eight inches by Sunday evening. Up to twelve more inches of snow were forecast for southern Minnesota by Monday night.

Shortly after the first cancellation, the 5:40 p.m. replacement was scrapped, leaving the 26 players and staff, loaded down with equipment, with two options: riding a bus until 2 a.m. Monday to make the start of a new block of classes that morning or waiting until Tuesday for a flight.

“We contacted (athletic director) Ken (Ralph) and he approved of getting back in time for classes,” Tigers coach Scott Owens said when the bus passed by Des Moines on Sunday afternoon. “The prospect of spending 2.5 days at the Minneapolis airport hotel didn’t appeal to us.”

There’s good reason for that. The team spent 10 hours at that airport getting back from St. Cloud because of storm cancellations. Factor in a connecting flight through Atlanta from Michigan Tech and two trips to Alaska and the Tigers have plenty of frequent flyer miles.

Wonder if they painted each other's faces black and sang minstrel songs to pass the time...

Perhaps another banner to hang in the World Arena is on the horizon.

Will be interesting to see if CC buses up to Anchorage for the first round of the playoffs.

If they take the bus, tell the driver to leave the motor running. They won't be there long.

I hope the heater wasn't broken. We all know what that bus ride down to Colorado Springs did to the DU squad earlier this season!

Tough travel year eh Scotty? I'm certainly willing to pitch in for a cab ride for you to Supercuts so you can get a new haircut. That jheri curl ain't working bro.

Mountains on the left is OK for doing to DU from CC... but going past the Castle Rock exit always throws them in a panic

Navigation is in their next block of classes

Owens may be taking an unplanned trip after the season is over, if you catch my drift.

I don't catch your drift. What unplanned trip? Do you think he's going to prison or something?

i wouldn't worry about any travel for cc after the first round of wcha playoffs... poor guys could use a break.

DU will have to contend with a flight to minneapolis TWICE and an ncaa regional between. oh well, we will just have to deal with it! rest up lil' tigers

What is the total goals and shots in this tie?