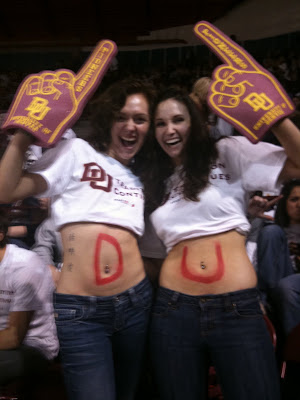 On the blueline Colorado natives J.R. Ryder and Chris Nutini played physical games.keeping the Tiger forwards at arms length. The Gold Pan remains in DU's hands for another year, but its safe to say Colorado born players have never played a greater role in its outcome.

Posted by dggoddard at 9:46 PM

DU trailing 2-0 after 5 minutes and things are looking grim.

Out trots Jesse Martin on the red carpet during the TV timeout halfway through the first period.

DU scores four goals over the next 17 minutes. Game Over.

Great win tonight after a mostly horrific first period for the Pios.

Jesse Martin's one-ice moment was awesome - the arena fell silent for his thank you's, and both teams cheered him, as did the refs, and the CC fans, too. Very emotional moment, and from that time on, Magness was often loud and electric as the crowd climbed back in to the game.

Big performances from the Pios to take over the game with four unanswered, and the energy of students, band, and cheerleaders really helped the boys.

And as for your front-page hotties, credit Mrs. Swami who saw them and took the picture...

Mrs Swami has an eye for the talent.

The Pairwise Rankings can be a fickle mistress. DU goes from #2 to #6 after splitting with CC this weekend.

Just goes to show you how damaging it can be this time of year if you don't come out firing from the first whistle. Luckily DU was able to claw back on Sat.

That's has more to do with UND having a bye and UNH pulling out a win over the B.Bears. We'll move back up next week maybe even Monday, if Jack's boys can knock off the Catholic School of Beacon Hill.

Why do they not present, and skate the Gold Pan after the game? I imagine it's one of 2 things... #1, since the original pad got lost, they don't want to risk it happening again? Or #2 - in the case of DU atleast.. that is not the trophy they're after - sorta like the NHL President's Cup?

I agree, the winners need to skate with the Gold Pan after the clinching game. Do it for the fans who spend a heck of a lot of money following the team and attending the games.

Might be Gwoz down playing it--as he's been trying to focus the boys on the NCAA's.

Remember the awful "faces of death" while DU was skating the McNaughton after losing to CC about this same time last year? Kind of the same situation. Like the other Anon said..... the Pan, in essence, means nothing to Denver right now. CC on the other hand, acts like it's the National title. Which it actually IS - for them

I wouldn't say that the Gold Pan means nothing. CC is a good rival, and has had the upper hand more often than not in the last 15 years or so. I'm sure the Pan means a lot to the DU seniors, especially, who have kept it for the last two years.

Of course, DU has bigger trophies to play for this year, but it would have been nice to see the team enjoy the Gold Pan on the ice.

#1 star of the game Jessie Martin

We come out hitting but CC gets two quick goals. He comes in and changes the whole demeanor of the Pioneers.

Looks like CC trophy case will be empty again this season.

Their trophy case may be empty but they can still hang a few more banners up after the season...

Wow, this was the same group that said we get the majority of our scoring from our Freshmen.

I suppose after all of these years they have learned the art of making excuses.

After an awful start, a great game last night. Seeing Jesse Martin was really cool, and the crowd was awesome last night. I'm glad to see DU retain the Gold Pan, and hopefully the Pios can remedy the bad starts and figure out a way to play with the lead. Only 8 more regular season games to go.

Wait, there's another banner you didn't mention that belongs in World Arena... I've seen pictures of it.... looks like a white bed sheet, spray painted lettering...... can't remember what it signifies though.....

I heard CC is giving a 2011 participation banner in the Gold Pan to the team to keep their spirits high.