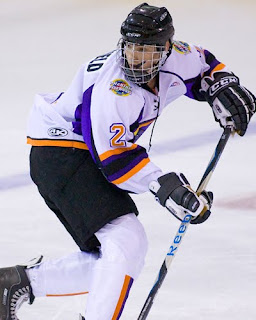 (above) DU recruit Scott Mayfield continues to rack up the hardware
From: YoungstownVindy.com

The USHL will not have an all-star game this season, but named 44 players as All-Stars anyway.

Mayfield, a first time all-star, was quick to say this award would mean a lot less if the Phantoms do not qualify for the post season.

“It feels really good, but I know my teammates are focused on the games ahead,” said Mayfield. “This accomplishment ranks up there with all of my other personal awards but what means the most is how well the team does. If we do not make the playoffs, no disrespect, this award does not mean nearly as much.”

Mayfield competed at the NHL Research, Development and Orientation Camp last summer and in November he played for Team USA at the World Junior “A” Challenge, where he was a member of the gold-medal winning team and named the tournament MVP.

“If you know Scottie and how humble he is this does not mean much to him,” said Noreen. “The way he comes to the rink would not change even if was not named an all-star. This is great for him and his family but since day one he has not changed who he is or what kind of player he is.”

Mayfield is expected to be selected in the first round of the NHL Draft this summer.
Posted by dggoddard at 2:20 PM

Email ThisBlogThis!Share to TwitterShare to FacebookShare to Pinterest
Labels: Mayfield

Kids looks like a fudge packer to me... He should fit right in!

According to the Urban Dictionary, its a troll who cruises other teams' sites after their team has been virtually eliminated from the NCAA playoffs.