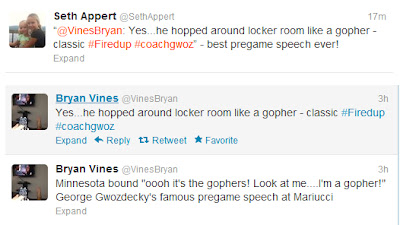 Posted by dggoddard at 9:14 AM

He is mistaken; Gophers are not known to hop.

...They are known to be rated No. 1 going into this season - with a roster that is made up of 85% Minnesota kids.

Gophers might not be known to hop, but they certainly are known for choking. Enjoy that pre-season #1 ranking Charlie.

And, as we all know, pre-season rankings mean precisely.....dick.

The only ranking that really matters is the one done at the END of the season. You know, AFTER the National Champion is crowned.

If you're clairvoyant enough to predict that ranking, how about you tell me the Powerball numbers for the week when you have a second?

Also, who cares where your players come from? I mean, I know the inbred hicks from places like Owatonna and Red Wing do, but who else?

Honestly, what does that prove? That lots of kids from Minnesota play hockey? Well..duh, no surprise there. Aside from getting blindly drunk so that you don't realize that you're an oil field and an Air Force base away from being North Dakota, what else is there to do up there during the winter?

Nope. DU was watching Minnesota get blasted 6 - 1 in Tampa.

You sound like a CC fan. Next thing you know, you'll be hanging participation banners in Mariucci.

I bet a little guy like gwoz does a great goofer impersonation.

Hey speaking of the Goofers, what is the team formerly known as the North Dakota FIGHTING Sioux (oooooh I said it) calling themselves now? The angry Gophers? UpsetBadgers? The Growling GroundSquirrels? The Pissed Prairie Dogs? MadMeerKats?

Both those schools SUCK. So do CC. Badabing.

To the bold Anonymous posters:

I already have a firm grip on the ignorance that seems to prevail among those who don't understand Minnesotans appreciating all of the Minnesota kids on the Gophers. But thanks for giving me a reason to spell it out.

Who would you rather watch play D1 in his home state; your brother or a kid from somewhere else in your state? Probably your brother.

Who would you rather watch play D1 in his home state; a kid you watched come up through a very competitive high school league in your home state or a stranger from another state or country? Probably the local kid.

If you're an American, do you root for the Canadian Junior team when they play the USA? ...I mean, hey, who cares where they come from.

To those of us that are fortunate enough to have a bunch of in-state kids on our local D1 team it is a real treat to watch them.

No ignorance about it, we just see an ez target to troll by saying stuff like that. Very ez apparently. Why don't you go back to recycling other people's news links and call it a hockey blog? At least DG tosses in his own humor a bit when he recycles links AND doesn't take the summer off.

To Mini Power: I have thought about blogging, but I do not have a blog at this point. I created and run an aggregate hockey news site. It is styled in the same vein as two successful web sites; the Drudge Report and Scripting News.

Thank you for visiting it! ...If it is not to your liking please checkout some of the other sites I link to, I bet you can find others that you prefer.

I'll agree with Charlie on something. I do enjoy watching Colorado guys playing for DU. I'm not obsessed with it like people from Minnesota are, but it's been great to see not only the number of Colorado players increase, but also the overall talent level.

"To those of us that are fortunate enough to have a bunch of in-state kids on our local D1 team it is a real treat to watch them."

Charlie - I'll give you the benefit of the doubt on the quote above and assume by "us" you were including DU and not trying to make some sarcastic remark. You'd have to be truly ignorant to insinuate that DU doesn't a respectable number of Colorado guys on the team. Especially considering how far the state of Colorado has come in hockey over the last decade or two and that our entire team used to be Canadian just a few decades ago.

If you're a fan of college hockey developing in-state product, you have to be a huge fan of DU's efforts. They have made more recent progress than any other school.

Please don't assume I'm an *ss - I am not being one bit sarcastic about watching in-state kids on a D1 team, be it Wisconsin, Michigan, Colorado, or anywhere. It is awesome icing on the cake as far as I'm concerned.

I don't care where your players are from....DU looks like S&%t this year. If it were a great place to play and all nine of your fans showed up for games, your team wouldn't have all left.

I am not a UND fan by any means, but to Anon 6:37....Does it matter what they will be called? They look a lot better than DU does this year. They'll win two titles before your even in the conversation again. You guys re-sign Gwoz yet?....you better hope you do.....hanging on by a thread.

The trash talking is escalating. Must mean hockey season is just around the corner!

Don't be surprised when DU surpasses expectations this year.

So they'll finish 4th in the WCHA.

I say Good. We need someone other than friggin BC to be heavily favored going into October 1st for a change. That goes right back to the movie "Miracle".... hockey players from Boston and Minnesota. There's plenty of hate between those two. We'll talk to y'all after the realignment.

I will probably check out your links once you start updating them again!

I would never want to see DU become a team of all Colorodans or even become an all USA roster. We need college hockey to provide the best possible competition for all players, and that means players from everywhere need to be in our game.

If NCAA Teams became American only, the best players would no longer play college hockey because the competitive standard would slip. American players want to test themselves against the best.