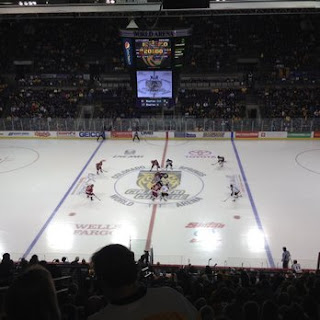 In what was always going to be a hotly contested game, Denver (5-3-0) emerged victorious at the World Arena on Saturday night with a 3-1 victory over archrival Colorado College (0-10-0). Despite a few tense moments in front of the goal, Denver dominated the time of possession and shots on goal, 32-20. Tanner Jaillet bounced back from his shaky weekend in Boston in a big way as he stopped 19 shots and took control of the game defensively.

Denver controlled much of the play in the first period as they outshot CC 9-2 through the first 20 minutes of play. Despite numerous great scoring chances right in front of Tigers goalie Jacob Nehama, DU couldn't find the back of the net and the two teams went into the intermission in a scoreless tie.

Finally at the 16:25 mark of the 2nd period, the Pioneers silenced the World Arena as they broke through and took a 1-0 lead. After a gorgeous feed from Will Butcher in the low slot, Troy Terry buried a perfect shot past Nehama's glove.

Throughout the second period, play was as chippy as it had been throughout the weekend. One skirmish (fight) at the 4:49 mark put four players in the penalty box for roughing. 2 for the Pios (Grant Arnold and Jared Lukosevicius) and 2 for the Tigers (Tanner Ockey and Trevor Gooch). At that point, the referees, Todd Anderson and Brad Shepherd (have at it in the comments), finally took control of the game and ensured that nothing like that was going to happen again for the rest of the night.

After the second period, even though the score didn't reflect the balance of play to that point, the shot totals certainly did as the Pios led 22-13 in that department after 40 minutes.

DU's lack of scoring through the first two periods came back to haunt them temporarily as CC's Cody Bradley picked up a bad rebound off of a Jaillet save and found the back of the net to tie the game just 2:50 into the 3rd period. Then, just ten seconds later, Tariq Hammond took a phantom well-deserved interference penalty to give CC its first real opportunity to take control of the game.

The exact opposite happened. Instead of CC taking control of the game, the Pioneers didn't let the Tigers hold the puck in the zone for more than 5 seconds at a time and consistently cleared the puck time after time. They ever managed to get a shot or two on goal while they were shorthanded.

CC's hopes of winning seemed to die as their power play ended as DU began to push the pace and put pucks on net at an alarming pace. At the 9:56 mark of the 3rd period, Matt Marcinew one-timed a perfect feed from Nolan Zajac from the left circle past Nehama's glove to give the Pios a 2-1 lead. Even if Nehama saw the shot off Marcinew's stick, it wouldn't have mattered as it was a perfectly placed rocket of a shot.

Then, with about 2 minutes left in the game, Dylan Gambrell sent the Tigers fans to the exit with a great insurance goal that snuck past Nehama to give the Pios a 2 goal lead. As soon as the red lights flashed, there was a mass exodus of black and yellow moving upwards, toward the concourse and to the parking lot.

The Pios did have a withstand a final Tigers assault in the last two minutes of the game as the Tigers pulled Nehama with a minute left, but the score remained and the two teams shook hands with the scoreboard reading 3-1 in favor of the Pioneers.

Tonight's game is important as Denver has officially retained the Gold Pan for the 2015-16 season to make it 2 straight years where the Gold Pan has called Denver home. Even though there are still two games left to be played between these rivals, the worst that could happen for Denver is a series split. In the event of a split, the Gold Pan remains with the team that already owns it.

The Gold Pan will call Denver home for at least another year and Pioneer hockey fans can breathe a little easier now that they know CC won't be coming away with that all-important hardware.

Gabe Levin had the other assist on Terry's goal in the first period; Butcher tallied two assists on the night to make it 4 straight games with a point; Denver took 4 penalties for 8 PIM while CC took 5 penalties for 10 PIM; Marcinew's goal was a rare PPG for the Pios; Gambrell has been finding a lot of playing time on the scoring line with Heinen and Moore this season as he played on that line again tonight; The weekend sweep of CC helped DU in the PairWise Rankings as they rose from 40th to 24th.

The Important thing is that the Pios treated this game as a business trip. They kept pressing, got the goals they needed and secured the Gold Pan. This CC team is underpowered and young with 14 freshmen, but you knew it wasn't going to be an easy win - nothing in the NCHC is easy, and when you add rivalry and a hostile environment to the mix, it's even harder.

Now it's on to Duluth. UMD is fast and talented, and DU is vulnerable this year to odd man rushes. Pios will need to be a bit more surgical to gave success against the Bulldogs.

Somehow, a sweep over CC makes the Sunday afterwards just about perfect. You find yourself with a bounce in your step, a smile on your face and the precise feeling that comes from the fact that the universe is aligned in the cause of good over evil.

While I'm super proud of the Pios for their sweep of the Kittens, I still think the requirements for winning the Gold Pan need to be changed, I'd make it where a team has to win 3 games before being declared the winner. In the odd chance of a tie, it'd go by goals scored. That way all 4 games really matter, unlike this year, and it'd up the scoring- something the Pios need to work on this year, imho.

DU is currently #14 in NCAA offense at 3.62 GPG. This is the highest among the NCHC teams, and if the Pios can stay at this level, the offense should be ok this year, as they are getting some real balance of scoring among the four lines.

The bigger concerns to me is a bad power play (#42 nationally at 13.7%), a mediocre defense (#24 nationally) with a propensity to give up odd-man rushes, and goaltending that isn't yet consistent, particularly letting in the early softies. Jailed and Cowley are #33 and #35 in goaltending nationally, and I am hoping that both goalies can iron out the inconsistency and move up in the stats.