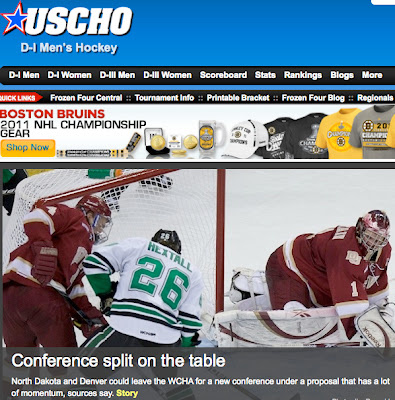 BREAKING NEWS: USCHO.com is reporting that an eight team College Hockey Super League announcement could be made within the next two weeks. Eight schools have been sent formal invitations to join the new conference.

Kevin Pates of the Duluth News Tribune has an article about the University of Minnesota-Duluth being invited to join the proposed College Hockey Super League [CHSL].

At the WCHA Final 5 various media sources speculated that the Minnesota schools weren't interested in joining a "super league" due to the travel costs associated with traveling to far-flung destinations.  Clearly winning the ice hockey national championship has convinced the athletic department at Minnesota-Duluth that the benefits may outweigh the costs.

"Minnesota Duluth has been asked to join a discussion of a proposed eight-team Division I men’s conference, which would likely start in 2013-14, sources indicate.
The conference: UMD, North Dakota, Denver, Colorado College and Nebraska-Omaha of the Western Collegiate Hockey Association, and Miami University of Oxford, Ohio and Notre Dame of South Bend, Ind., and possibly Western Michigan of Kalamazoo, Mich., all of the Central Collegiate Hockey Association.
There’s talk that a resolution on a new Super League could come in July or by Labor Day. The current 12-team WCHA already has schedules for the next two seasons." [read entire article]

Posted by dggoddard at 4:07 PM

Announcement on the new league could come within two weeks according to USCHO.com

I hope this super conference can land Notre Dame. But I suspect Notre Dame is more likely to go to Hockey East. I think the super conference would be good for DU. But I worry about the futures of the leftover WCHA and CCHA teams. Some of those teams are only marginally relevant now, and this could be another nail in the coffin for some of them.

This is a great lineup! Clearly a superior leaque to either the new big ten or the eastern league that B.C. and B.U. belong to. Six top tier teams as opposed to two or three from the other leagues.

This will really hurt the Alaska schools, the small wcha and ccha schools. You cold really see several teams dropping their programs.

Schools can't just drop sports because they feel like it. There are Title IX considerations and they have to field a minimum number of teams to remain in the NCAA D-I or D-II.

Hockey is an expensive sport but schools can save money by cutting scholarships, coaches salaries, travel costs.

They can also increase revenue by building attendance, playing bigger schools on the road, attracting more students and getting sponsorship.

Already, Minnesota-Moorehead is thinking of adding hockey so that they could play Bemidji, MSU-M and SCSU.

Good point DG you right Wayne St. still has a program so does Kent St. and UIC you are so smart. So they cut everything, and go on the road to get killed. You must have been a theatre major at DU eh?

This whole mess was obviously caused by our jealousy.

This a positive development for the Pioneers.

If you want to blame someone for this if it happens, blame the Big 10.

This is great news for the Big Ten!!! Now they can schedule whomever they want and not have to worry about flying to CO, UNO and driving to UND. Big Ten cupcake schedule here we come. I doubt they schedule many games against the BHHC 8.

DU isn't going to have much if any room on their non-conference schedule.

2 games committed to the Denver Cup.

2 games to start the season home or away against an Eastern team TBD.

That only leaves at most one game to fill.

Well, the exhibition doesn't count against the 34 games (is 36 when traveling to Alaska) and DU will probably continue to schedule AFA into the Cup. But, yeah, DU will have maybe 2 non-conference series to be scheduled each year, since the Cup is there and since DU loses the Alaska situation, which allowed an extra non-conference series...unless DU schedules in UAA, then DU would gain the extra 2 games, since games in Alaska don't count towards the maximum allowed.

Trading MSUM, MTU, UAA, and Bemidji for Notre Dame, Miami, and Western Michigan, and guaranteed home series against those new teams each year?

DU's ticket office will be much happier....

People have to realize that this move is all about money, program ambition and the NCAA recruiting arms race.

This potential new conference is very similar to the formation of Hockey East in 1980s, when the big old ECAC fractured in two because there were schools that had bigger ambitions (HEA schools) being held back by ECAC schools who did not want to invest in hockey or play as a real revenue sport.

These new superconference schools want to keep top recruits, and they just wont get them playing in a decimated WCHA or CCHA. They all have big investments in this game, and they are proactive in protecting them.

I feel bad for some of the smaller schools, but this kind of stratification happened years ago in Football (The Ivies dominated early football) and NCAA basketball (when the Big East was formed in the 1970s).

College sports is an arms race now. And those who can't spend big are getting left behind.

Throw in 17 National Championships. Plus all eight teams made the 2011 NCAA Tournament. Not too shabby.

WMU's coach is a finalist for a Detroit Red Wings assistant coach position. That could slow Western's rise to national contender substantially.

sounds to me like Donald is jealous. and btw Donald, please watch your language. if you can't, stay on your own blog

Donald is butt hurt about the potential of being left behind. I would be too if I were him. It sucks. However, I wouldn't be such a prick about it.

Donald Dunlop is a Pompous jerk that uses a lot of fancy words but says basically nothing; he also has a hard time interacting with others, when ever someone doesn’t see his point of view he calls them something vile, usually unflattering and filthy… Dunlop or Double D thinks he is the ultimate intellectual mind when he is nothing more than a trailer park potty mouth…

If you can look beyond the sometimes insulting and confrontational tone and the bad words he sometimes uses, Donald actually has a very good hockey mind. You just need to get past the bluster and you can see he cares about his team and he cares about the game way more than most fans. I actually like the guy - he calls it as he sees it.

If Donald Dunlop wasn't such a jerk he would probably be a good guy.

I am surprised he has got his ass kicked yet... I wonder if he is such a pompous, condescending, objectionable jerk in public?

hey mexico. how does donald like his tube steak? do you give it a nice, spicy rub?